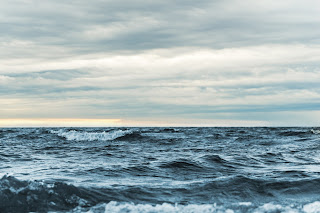 Normal ocean waves result from the frictional drag of wind on the surface of the water. The waves you observe at a given beach may originate thousands of kilometres away,whereas tsunami waves are caused by displacement of the crust caused by an earthquake. Waves have a crest and a trough, the distance between crests being known as the wavelength. Waves travel in groups called a wave train. Waves are not all moving at the same speed. When one wave catches up to another you can end up with an even higher wave. This is called constructive interference.

Ocean waves can travel hundreds of kilometres before they reach the land. The distance of water over which the wind has blown is called the fetch. A long fetch will result in big waves and big waves carry with them a tremendous amount of energy. Storms create destructive waves thus a lot of erosion takes place during storms,Even on calm days it is possible to get big waves as these ones have been generated in a storm somewhere else some time ago. Waves that have been generated somewhere else are called swell. Swell waves have a long wavelength and are considered desirable by surfers compared to the choppy locally produced waves which have short wavelength. Waves on the east coast of Australia are often big as may have traveled a long distance across the Pacific Ocean before reaching Australia. Waves that build up coastlines by transporting and depositing sedimentation the shore are called

constructive waves. So what happens when waves reach the coast. There is a maximum depth to which waves will cause any significant water movement. We call this the wave base. Thus below the wave base waves have no impact on the sediments below. However when waves enter shallow water the usual orbital motion of water becomes elliptical, the waves slow down and becomes steeper and higher. This is called shoaling. When the waves become too high relative to the waters depth the waves break. Since the water is shallow the breaking waves are able to push the sediment up towards the beach.This flow of water moving up the beach is called the swash. The returning flow of water down the beach is called backwash, and also drags sediment back with it. The offshore topography of the seafloor will impact on the way waves break. Spilling breakers have wave crests spill forward creating foam and turbulent water. They occur where waves travel over a wide gentle sloping seafloor.Plunging breakers have the classic barrel shape where the waves curl and their crests fall forward with a lot of force.

They occur on steep beaches, on sandbars and the outside edges of reefs. In these places the waves are moving from deep to shallow very quickly and they have to slow down fast. Surging breakers are waves that rapidly surge up a beach without appearing to break. They occur on beaches where the beach profile is too steep for waves to break properly. These types of waves have a very strong backwash. The shape of the coastline also affects the way waves travel towards it. When waves approach an uneven coastline of bays and headlands they are refracted and become increasingly parallel to the coastline.Refraction occurs because the waves slow down first in the shallow water,forcing the refracting part of the wave to break first at the headland, while the other part of the wave that is traveling faster towards the beach is in deeper water. Refraction increases erosion at headlands and deposition tends to take place in the lower energy bays and beaches. Diffraction occurs when waves meet a gap such as a gap between a break wall or between two islands. Once past the barrier they spread out in all directions rather than carrying on straight.