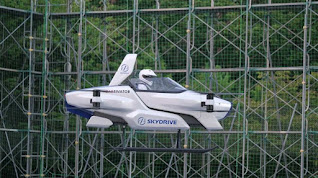 The company Skydrive said on Saturday that it has completed the flight test using “the first manned testing machine” named SD-03, an electrical vertical takeoff and landing machine(eVTOL) and they had received funding from various investors including the Development Bank of Japan.

The flying vehicle comprises of one seat, and 8 operating motors and two propellers at each corner. It lifted about 3 meters in the air and flew for 4 minutes operated by the pilot; and in future it will fly at a speed of 40mph in a single recharge the company stated.
Five years ago there were various prototypes and designs of flying vehicles but this one (SD-03) is lighter and perfect in design as compared with other ones, the chief executive of Skydrive said.

Analysts said that the flying cars global market is estimated to reach $1.4 trillion to $2.9trillion by 2040.