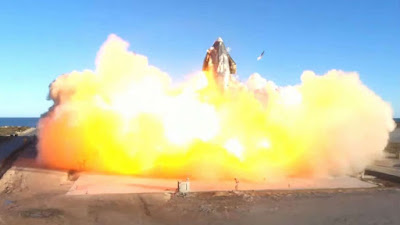 The 160-foot-tall starship of SpaceX busted into big mighty flames at Texas on Wednesday as it touched altitude of 41000 feet before returning back to the Launchpad.

The starship was approaching the ground at a faster rate than expected causing it burst into  flames and bombarded into pieces which destroyed the test vehicle. However, during the decent it changed its position from horizontal to vertical before landing making it a great achievement for SpaceX.

The futuristic starship was built for a complete 2 stage reuse Elon musk said, as represents the future rocket that will carry humans to the moon and Mars.